Similar to the genesis of other Christian churches in Brigham City, Aldersgate Methodist Church started after Thiokol Chemical Corporation opened its plant in 1957. Methodists who had relocated from across the United States to work at the plant, came together to explore the possibility of starting a local congregation.

On March 17, 1963, over 20 interested persons met in the basement of the Masonic Lodge in Brigham City, the old Presbyterian building, with the Superintendent of the Utah –Western District and the Reverend Gerald F. Makepeace, a pastor at the Community Methodist Church in Tremonton. Soon the number grew to 106 individuals.

With interest in their movement increasing, the congregation decided to draft a charter. On May 14, 1963, the members christened their church, Aldersgate United Methodist.

The congregation met in a house on 482 Camaren Drive until the late 1980s when Aldersgate purchased its current meetinghouse, which previously served as the Bushnell Army Hospital chapel and music rooms for Intermountain Indian School students. Shortly after that, the church expanded the property to support the growing membership.

As the only Methodist Church in the area, Aldersgate serves a vital purpose and enriches the vibrant Christian community of Brigham City. Membership consists of a mixture of locals and transplants that represent the ever-changing landscape of the community. 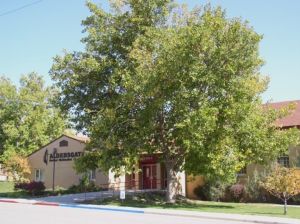