The Latter-day Saint temple’s twin spires dominate the Brigham City skyline. On completion in September 2012, it became the 151st operating temple of the Church of Jesus Christ of Latter-day Saints. Unlike a cathedral, Latter-day Saint temples are not used for weekly congregational meetings but rather special covenant ceremonies including weddings. They are also designed to provide a place of peace, refuge, and spiritual contemplation. Only church members who have gone through a special interview process to determine worthiness are allowed to enter temples.

Brigham City native and Apostle for the Church of Jesus Christ of Latter-day Saints Elder Boyd K. Packer, and former Central School student, played an important role in the selection of the temple site and its design. At the groundbreaking ceremony, he commented on its prime location. “Can you imagine,” he said, “what it would take to have a block like this in the central part of the city and preserve it for 150 years to wait until a temple could be built?”

The architecture of the Brigham City temple pays homage to the city’s early settlers. The interior mimics the layout and design of 19th century Utah temples such as those found in Logan, Manti, and Salt Lake City with murals covering the walls of some of the ceremonial rooms. The temple designers, FFKR Architects, honored Brigham City’s unique community life by incorporating the image of the peach in the stained glass, ceiling paintings, carpet carvings, and woodwork. Early homesteaders noticed that the area’s rocky soil and access to water provided great conditions for growing the fleshy fruit, and the area eventually became known as the “fruit highway.” The peach motif in the temple honors the hard work of generations of residents. 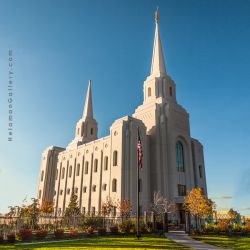