A Storied Past By Brian Passantino

Catholicism has had a permanent presence in Box Elder County since the completion of the Transcontinental Railroad at Promontory Summit on May 10, 1869. But Brigham City wasn’t always a center for Catholicism. Originally, most Catholics congregated in Corinne, a town about 10 miles outside of Brigham City, where Father Honore Bourine first held Mass in 1870. From 1872 to 1892, the Catholic community in Corrine remained small but devout.

Eventually, in 1892, the parish was closed due to lack of growth and resources. For the next fifty years, Box Elder County Catholics would have to make the trek to St. Joseph’s parish in Ogden to attend Mass. But when World War II broke out, that all changed.

The construction of the Bushnell Army Hospital marked the establishment of St. Henry’s Mission in Brigham City in 1943. Yet numbers remained small until the 1950s. During this decade mission numbers surged thanks to the construction of the Intermountain Indian School in 1950 and the arrival of the Thiokol Chemical plant in 1957. Students from the Intermountain Indian School and Thiokol Chemical employees breathed new life into the parish. St. Henry’s congregation flourished, becoming a parish in 1950.

Since that time, Brigham City’s Catholic community has continued to grow as more Latin American immigrants choose Brigham City as their home. Today, St. Henry’s regularly holds meetings in Spanish and English. The parish provides relief to those suffering in the community and throughout the world. St. Henry’s involvement with Catholic Relief Services continues to model selfless community service. In 2018, the parish broke ground for a new social hall adjacent to the church. Completed a year later, the hall stands as a witness to the vibrancy and growth of the Catholic community in Brigham City and Box Elder County. 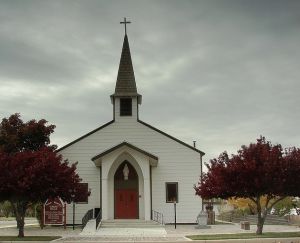