In January 1950, the US government transferred the Bushnell Army Hospital to the Intermountain Indian School, “the world’s largest boarding school” for Native Americans. With over five hundred Navajo students enrolled, it immediately transformed the ethnic and religious diversity of Brigham City.

Seven years later, in 1957, Thiokol built a plant in Box Elder County and hired a vast swath of employees from all over the United States, many of whom belonged to various Christian denominations. Rt. Reverend Richard S. Watson, the Episcopal Bishop of Utah, realized that many of the students from the Intermountain Indian School and employees from the Thiokol Plant were raised in Anglican homes (the Episcopal Church is part of the Anglican Communion). Having come to this realization, Reverend Watson discerned that there was a lack of ministering and missionary work in northern Utah, specifically at the Intermountain Indian School. He directed Reverend William J. Hannifin, vicar of St. John’s in Logan, to explore the spiritual needs of the students and staff. He found at least 250 Anglican students. Later that year, Father Hannifin conducted the first Eucharist for members at the Intermountain Indian School. This effort spurred a further desire to care for the community’s Anglican members.

On October 17, 1957, newly arrived members of the Thiokol Plant and Episcopalian Brigham City residents met with Father Hannifin to define the new mission of the Utah diocese. The new Episcopalian congregation originally used the Community Presbyterian Church for their services and later the Protestant Student Center, located at 435 East 700 South, close enough to the Intermountain Indian School to be convenient for the Indian students. Finally, in 1959 they purchased a lot to construct their new church. The congregation completed their new building on November 17, 1963. Local members of the congregation did most of the construction work on St. Michael's. The congregation continues to promote a welcoming attitude and desire to support vulnerable members of the local community. 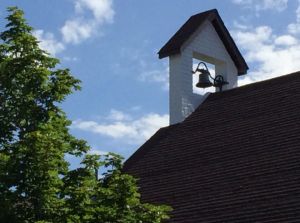