The permanent settlers were alarmed when a group of transients camping near the settlement had a fight with Indians and a white man was killed. President Brigham Young advised them to move farther south, away from the creek, and build a second, larger fort for protection.

The fort was constructed in July of 1853. Individual log houses were built next to one another so that their walls formed the outer edge of the fort on three sides with the south end open. A stream of water was channeled across the front for culinary use, and a rock wall was built at the rear with holes to shoot through in case of Indian attack.

Later the fort was expanded to house new settlers, and a log school building was added in the fall. It was used for school on weekdays and church meetings on Sundays. Families were each allowed 33 feet or less for their separate cabins.

William Davis enforced Brigham Young’s policy of feeding the Indians rather than fighting them. He and Simeon Carter settled many disturbances and soon won the Indians’ friendship and trust. After the Indian danger passed, the people were free to leave the fort and move back to their respective properties.

Text on Marker: BOX ELDER FORT In July 1853 Brigham Young ordered the people settled in the Brigham City vicinity to construct another fort to provide protection from the Indians. This Fort extended north and south about 15 rods and east and west about 8 rods from a point located about 15 feet east of this marker. The fort was later expanded to accommodate more settlers and a school house was then built adjacent to it. The exterior walls of the fort were actually the walls of the log houses which comprised the three walls of the fort. The south end of the fort near the location of the school was left open. The Indian danger soon abated and President Brigham Young ordered that a survey and a plat of the city be made in 1855 to allow the settlers to move from the fort. 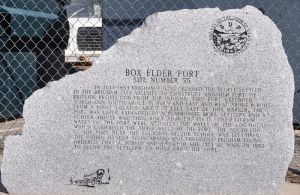