Local leaders had chosen the corner of Main and Forest streets as the site of the Tabernacle. When Brigham Young visited, however, he led the leaders to “Sagebrush Hill” the highest point on Main Street and said, “This is the spot for your tabernacle.” From this site, the building would be visible for many miles across the valley. President Young and Territorial Surveyor Jesse W. Fox laid the cornerstones on May 9, 1865.

Construction began in 1868. Settlers hauled limestone and sandstone from the mountain quarries. Workers in the Co-op masonry department shaped and laid the stone. Mountain pine was cut and used for joists, rafters, beams and lumber for the floor, roof, pulpit, benches and doors. The women donated produce from their gardens and all eggs gathered on Sundays to raise funds for an organ, a silver sacrament service and ornate volumes of scripture.

Progress was slowed when local manpower was recruited to help with the transcontinental railroad. The Tabernacle was completed and dedicated in October of 1890 only to be gutted by fire February 9, 1896. The townspeople decided to rebuild it as quickly as possible, and a year later the building was finished with many improvements over the original structure. It was dedicated March 21, 1897.

Through the years, the building has housed community events as well as religious services. It is a landmark building, one of the most photographed buildings in Utah, and annually attracts many tourists.

The Church closed the Tabernacle down in 1986-87 for a major restoration project, including replacement of mechanical systems, rebuilding exterior pinnacles, and cleaning brick and rock. All interior wood surfaces were repainted and hand grained to make them appear as oak or marble. The interior plaster cornice was painted and accented to complement the ornate chandeliers.

The Tabernacle was reopened and rededicated in April 1987. The building is still used for LDS conferences, concerts and other meetings. In 1971, it was listed on the National Register of Historic Places, one of the first buildings in Utah to be so honored. 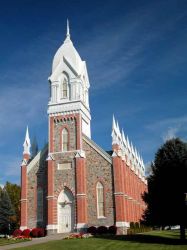