The old City Hall/Fire Station was built in 1909 and orignally housed the fire department on the ground floor and city offices on the second floor. The bell in the building’s tower sounded a nightly curfew.

In 1935, the fire department moved into larger quarters. A remodeling project that year removed the large garage door, changed the building’s facade, and doubled the city’s office space. During the next three decades, the building housed all city departments, the police department, civil defense headquarters, and Circuit Court.

The police department moved out in 1966, and the remaining city departments left in 1973. The Brigham City Chamber of Commerce took over the building’s main floor in 1974 and continues to occupy it at present.

The building was listed on the National Register of Historic Places in 1988. 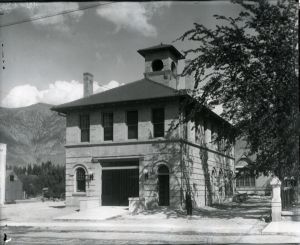 The building that housed the Central Chevrolet dealership had a number of apartments above the garage. I was 9 or 10 when we moved into apartment #7. Since the bedroom I shared with my sister was directly across from the red brick building that sounded a siren to alert the volunteer fire department into action when a fire was reported, we were used to hearing the siren go off at all hours. Early in June of my eleventh year it went off on a perfect summer morning (a Sunday). After a minute or so our father began banging on the bedroom door ( it was stuck) yelling “Get Up! This place is on fire!” We thought he was joking. My sister rolled over and pulled her sheet over her head, I opened my eyes and sat up.
When smoke began curling under the door we knew we were in trouble. I jumped out of bed half-dressed and my sister followed my father and I into the hallway. Standing on the back stairway with smoke curling around us the line of people ahead of my father and I stopped. I remember looking at my bare feet on the wooden stairs and wondering if we were going to die. Within 30 seconds the line was moving again, we reached the bottom of the stairs and shot onto the sidewalk. I was still looking at my bare feet on the gravel as we scurried to get away from the building when the wheels of the fire truck rolled past my toes. A minute later I turned to see billowing smoke and flames shooting into the sky where just minutes before my father and I had stood on the stairway.
Although the building burned for hours and we lost every earthly possession we owned with one exception ( a water logged Bible) we were grateful for the volunteers who responded so quickly.
My father and I had nightmares about the fire for decades. It seemed odd to me that my mother, sister, and brother never did until recently I learned they had escaped by running to the Main Street end of the building which had not yet ignited.
Whenever we come through Brigham we stop at Idle Isle candies which we love, but my eyes inevitably wander to the red brick building where the alarm sounded and fire fighters came running. Bless them and those who followed.