The Oregon Short Line Company was established in 1878 to provide the Union Pacific Railroad access to the Pacific Northwest. The company announced in 1906 that it would construct a modern new depot in Brigham City. The depot was completed and opened to the public on May 19, 1907.

Over the years, this depot served thousands of train passengers. In 1891, the number of passengers leaving Brigham City by train each month had averaged 500 to 600. By 1926, an Oregon Short Line schedule listed 13 daily departures from Brigham City.

Brigham was on the Union Pacific main line and handled small railway express packages and large shipments of coal from Helper and Price with 50 tons of coal per car.

Locally grown produce, including peaches, tomatoes, cherries, apricots, watermelons and cantaloups, went out by rail. The Knudson Brothers located their fruit packing and storage business within easy access of the railroad, directly south and east of the depot. A short spur track ran in front of the Kundson Brothers building for loading freight. A cannery was loated on the west side of the tracks, directly north of the depot, so that canned fuit could be readily located onto freight trains.

Mail service was another important feature on the trains. Mail bags and parcels from the local post office were picked up at the depot and taken to postal cars. Local residents remember taking mail directly to the mail box at the depot to get it out quickly.

During World War II, rail use increased. Servicemen were transported to and from assignments, and the wounded were brought to Brigham City’s Bushnell Military Hospital for treatment. Freight, including military and medical supplies and coal to heat the facility, were taken to Bushnell. A spur track was built for direct access to the hospital.

In February 1994, the depot was deeded to the Golden Spike Association of Box Elder County for restoring the building as an educational center for railroad history. 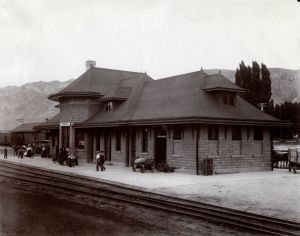