Protestants in a Latter-Day Saints Community By Reed Hepler

In 1874, Rev. Samuel Gillespie crossed over the Wasatch mountains from nearby Wyoming, settled in Corinne, a Protestant refuge, and began preaching Presbyterianism. Noticing that there were already strong Protestant churches in the area, he moved to Brigham City as that city’s population grew. At first, locals did not welcome him or his message and forced him to preach on the steps of a government building. Even the policeman sent to guard him did not listen and taunted him. Over time, his persistence paid off, and he purchased two city lots (71 and 77 on North Main, where the County Courthouse and DMV are now) and held services in an adobe house on one lot. His family later permanently moved into that house, and he started to build a meetinghouse on the other lot.

As construction began, opposition increased. One historian recorded, “Stones were thrown on the manse, doors kicked in, and family provisions had to be freighted from Corinne since the Brigham City Co-op had been cautioned not to trade with the family.” Despite persecution, Reverend Gillespie did not despair, and the local Latter-day Saints slowly warmed towards the Presbyterians. Even before the church was completed, Gillespie held public school classes for children and adults, with his sisters as teachers.

In 1954 the Community Presbyterian Church bought a building, formerly known as the Webster School, from the LDS First-Sixth Ward (311 South 100 East), and the lot it stood on, leaving their 1878 chapel behind. This building was recently torn down. Later, the Amity Lodge of Free Masons purchased the northwest corner of the new lot and moved the old log frame of the Presbyterians’ first church to this new site, using it as their lodge.

Through the years, Community Presbyterian Church became a force for good in the Brigham City community. In about 1915, it started an elementary and kindergarten school, establishing its civic presence. In 1964, the church built an educational building on the north edge of the lot (122 East 300 South) and named it Gillespie Hall, after their congregation’s founding pastor. The hall has since served as a soup kitchen, migrant daycare and information center, and a place for Boy Scout and Girl Scout meetings. 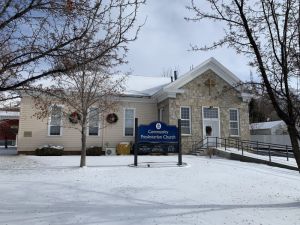