The Knudsen log cabin was built by Porter Squires for Wilhelm and Laura Amelia Knudsen in 1855 and was one of the first permanent structures in Brigham City.

Following their marriage in 1854, the couple lived in the Box Elder Fort until their cabin was built on the corner of 1st East and 1st South. They lived in the cabin from 1856 until 1865, and six of their 13 children were born there during that time.

Members of the Box Elder County Daughters of Utah Pioneers met with the City Council early in 1929 and requested that the cabin be moved to Rees Pioneer Park where it could be preserved as an example of the homes of early pioneer settlers in Utah.

The cabin was moved to Pioneer Park on April 16, 1929. Local newspapers reported that the old logs were still in fairly good condition and that the mortar between the logs was well preserved. The original fireplace, which had been used for cooking and heating, was still intact. Some restoration was required; the cabin was plastered, the fireplace repaired, and a new door, window and roof installed.

D.U.P. members each contributed 25 cents, furnished pies, and ran a Peach Days concession to pay for the project. They furnished the cabin with typical pioneer furniture and household items and had it ready for dedicatory services September 8, 1929.

Later, they moved the cabin to Brigham Young Park, where it currently sits just South of the Brigham City Museum of Art & History. 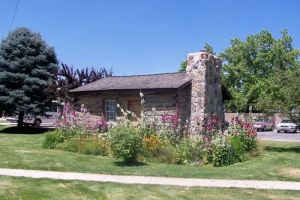 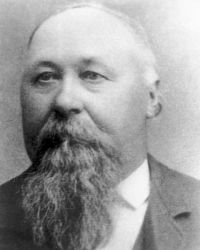